The Power of Hope 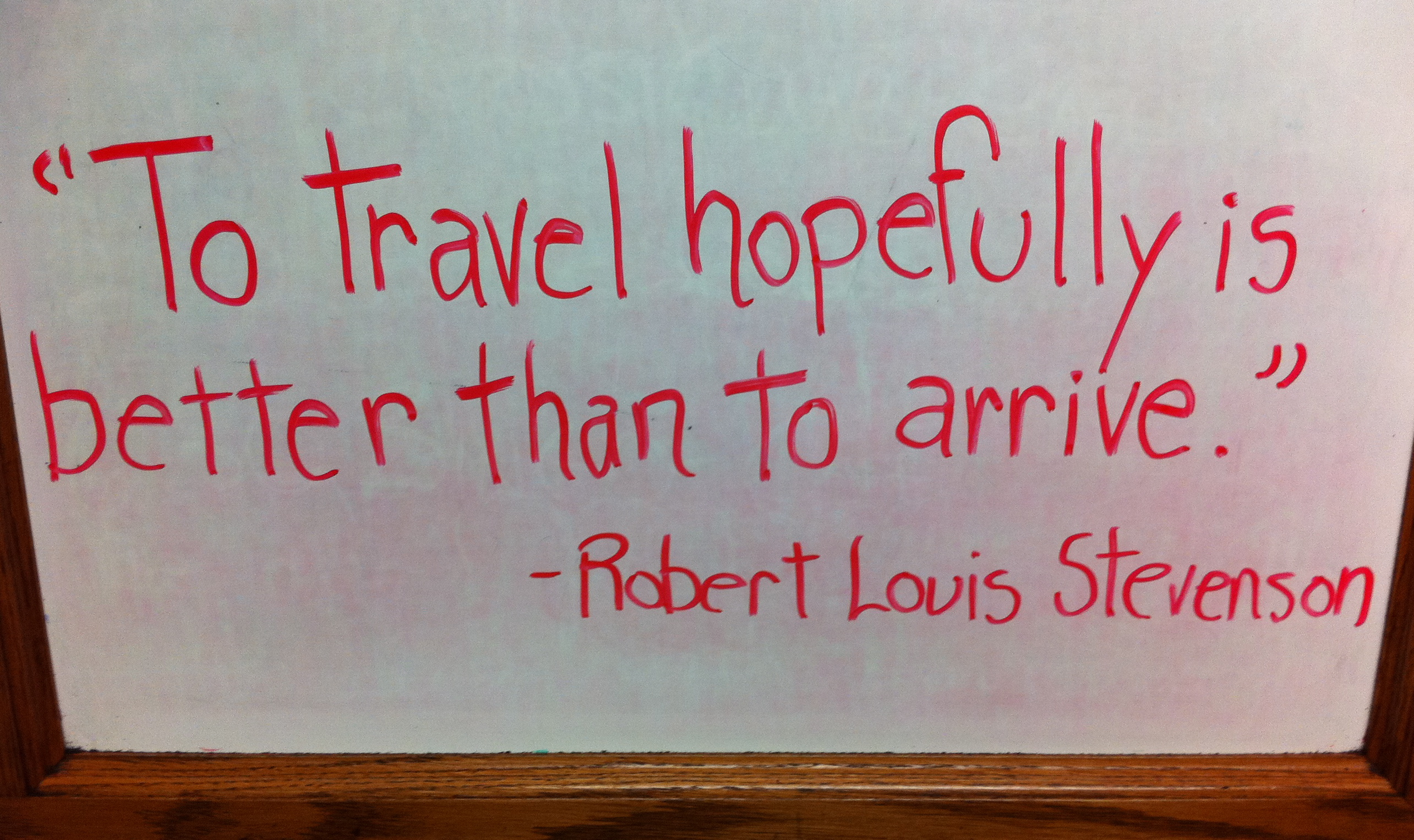 Are you hopeful about your future? If you’ve got Parkinson’s, this question may be tough for you to answer.

If you’re the cup-is-always-half-full kind of person, you most likely travel hopefully regardless of what life throws at you. On the other hand, if you struggle seeing past the downsides of life, you may be wandering on your journey with Parkinson's with little or no hope.

I had never read this quote before seeing it on a community announcements whiteboard displayed in my mom’s nursing home unit. I was pushing her in her wheelchair for our daily post-dinner walk and took a picture of it because I thought the choice of quote to be quite ironic. I looked around--did any of the residents around us seem hopeful?

Even if you’ve never been inside a nursing home, you probably have a picture in your mind of how it looks and feels to be inside one. If you imagine "sad," you'd be (mostly) right. Anyone I know with aging parents has said at one time or another, “There’s no way I’d put Mom or Dad in one of those places.” Until seven years ago, I said the same thing.

Before I tell my nursing home story and how Mom managed to stay hopeful in this unlikely place, let me start by saying not all of them are created equally. Some are bad. One might even say really bad. Some make you want to throw up. Sorry to be gross but some of the smells coming out of those places can leave quite the impression. And to be clear, it’s never a resident's fault when you get a whiff of something awful. That stems from a problem that seems to exist in many nursing homes–poor management. (I will save my thoughts on those higher-ups and how I believe many nursing homes have their priorities upside down for a future post.)

Fortunately, for every few nursing homes that aren’t hitting the mark, there exists one good home. Thankfully, after three tries,  we found that one for Mom.

The road to Mom ending up in a nursing home was a fairly common one: Her needs for care were being met for many years until suddenly, they weren't.

When she began her journey with Parkinson's thirty years ago, she was adamant she'd never end up in a wheelchair. To her, that was just about as bad as being dead. Though I can certainly understand why she felt that way initially, I'm glad that over time Mom realized she could still maintain a lot of her independence, even when she had to use a wheelchair now and then.

As the years passed and her Parkinson's advanced, Mom went from using a cane to using a walker, then finally to using a wheelchair to get around. Thankfully, because her disease took many years to progress, Mom was able to adapt mentally to each phase of her declining mobility. It wasn't always easy, but I give her props for her determination not to allow Parkinson's to stop her from living her best life.

Because Parkinson's is a snowflake disease--meaning everyone is affected differently-- no one can predict how long you will keep your mobility. In my mom's case, she was able to walk during her on times and rely on the wheelchair during her off times up until seven years ago. At that time, she started showing signs of dementia, which added to her need for around-the-clock care.

In addition to Mom's needs increasing, Dave's (her primary caregiver) were as well. Diagnosed with cancer, he had his doctor appointments, treatments, etc., to focus on. With too much on their plates, Mom and Dave realized that her caregiving situation was going to have to change.

One way in which our family was fortunate in this experience was having the ability to talk things over with Mom before any decisions were made. Moving a loved one into a nursing home is a big decision, so it's ideal if you can have everyone on board before you do.

When we first started the nursing home phase of Mom's Parkinson's journey, we were pretty hopeful. After all, there would be 24-hour care--somebody to help her anytime she needed. She'd have someone to make sure she got her meds on time. She would be safer. Mom was hopeful that her burnt-out caregiver husband would be able to visit her feeling rested, allowing them to focus on the love in their relationship, instead of that annoying Parkinson's.

The first nursing home Mom moved into wasn't her first choice, but rather a short-term solution. Where she's from in Ontario, Canada, most nursing homes have a waiting list so sometimes you have to make do with what you're given. Because she was "in the system" however, we were told that meant she would have a higher priority while waiting for her number one choice.

Unfortunately, the term "institution" would have best described Mom's first nursing home placement. Cold cement floors and angry looking nurses are what greeted you when you first walked in. It felt very sterile--a place you went to when you were deathly ill, not a place you would ever to choose to live in. Though there was someone there 24-7, the care Mom received seemed to be the absolute minimum the staff had to give without getting shut down by the government.

Even with all there was to complain about, Mom kept hope alive because she knew this was just a temporary place to live until a spot opened up at her preferred nursing home. Thankfully, she only had to endure a couple of months there before we received the call saying a room was available for her.

The next home she lived was an extension of her local hospital.  With much fewer residents and a higher staff-to-resident ratio, we hoped for a better level of care. Though this place was a step above her first experience, as time wore on, we started to see its flaws.

It was always a challenge to impress upon the nurses the need for Mom to get her meds every three hours. We had meetings with the staff to explain how the disease works and how having an even flow of dopamine was crucial to her keeping her mobility. We even put notes on Mom's door to remind them, but to no avail.

Mom also developed some side effects from her meds that we'd never seen before (extreme tiredness and slurring while trying to talk). Through some researching, we found out that one of her meds had been increased without us being informed--something that should never happen. After having the meds decreased, Mom went back to her normal self again.

Another challenge Mom had that she hadn't anticipated was lack of visitors. She had hoped her friends would come to see her often, but many of them were aging and had their own health issues to deal with. I was living five hours away so though I could visit fairly often, I couldn't just pop over for dinner any time she wanted company.

Despite these challenges, Mom and I remained hopeful that things would get better. If we couldn't get the quality of care and personal visits she needed where she was, perhaps there was another solution?

We decided to try a move that would have Mom living closer to my sister and me. This nursing home was only a twenty-minute drive from my apartment. I was single and had lots of time to devote to her care so I took it on as best I could. We hired an outside caregiver to come in to cover the days I couldn't be there. We were all hopeful that Mom would thrive there.

Unfortunately, Mom's dementia got worse only a few months after arriving at her new home, so we had to move her into a locked unit of the long-term care unit. This was to prevent her from wandering out of the home and getting lost. I should point out that technically the unit wasn't locked--you just needed to punch in an easy 1-2-3-4 password to get out--but any resident with medium-to-high levels of dementia was unable to do this.

The idea of being locked into anything sounded horrible to all of us, and as she was incredibly claustrophobic, this was especially troubling to Mom. To help alleviate her feelings of being locked in, my aunt (Mom's other advocate) and I managed to convince the head nurse to allow Mom to come and go through a back door that was intended for staff only. Outside the door was a small, gated space overlooking a greenbelt. It may not have seemed like much to anyone else, but having the ability to go outside any time she wished was a real gift for Mom. It kept her hopeful.

Mom spent the next three years in that home, and her dementia continued to progress. Still, Mom seemed to adapt to each phase as best as I could expect anyone to. I thank our extra caregivers for that.